CLOSE ✕
Become a #YogaFriend
Thank you for your interest and support!

Please fill out the form below to
join my growing community of YogaFriends.

Thank you! You're a YogaFriend now!
Check your inbox for a message from RossC

Oops! Something went wrong while submitting the form

Everything is Nothing and Nothing is Everything, which Sure is Something

In the beginning, which never began nor ended…
There was Nothing and Everything, and it was good.
There was also Something, which was empty, but it brought Potential.
Potential had friends… Rest, and Action.
Action spoke first and it got heated, everything was on Fire!
And it got Real!
Eventually, Rest calmed everything down and everything chilled out to the Flow.
Rest got tired and laid down.
As he laid down he turned to Shape and Form.
Shape and Form looked back and were just glad to Be.
Nothing and Everything watched the whole thing go down.
Everything said to Nothing…
“Why’d we invite Something again?”
RossC

Did you know…? Everything in the manifest physical experience we call Creation is mostly Nothing. Its True! Atoms, the fundamental “stuff” of our physical reality are 99.99% empty space. Even though we feel mostly solid and experience mostly solids, that’s only one side of the story.

The Truth of matter is that Everything consists of mostly emptiness, Nothing. There is literally more Nothing in Creation than Something. Humans are only recently exploring this dimension of nothingness. We have known for many years now about the Strong and Weak forces. These are the forces that hold the entire Universe together like glue. They can be compared, roughly, to the magnetic forces of North/South or Positive/Negative. Just like the components of atoms, galaxies, molecules, and every other force in Creation, Everything is mostly Nothing.

Humans have known this obviously overlooked Truth for some time, but it is a travesty that more Humans automatically assume that is the only truth due to ignorance of not knowing. But, you may be asking yourself…so flipping what??

Well, this should be a comfort to those who feel heavy, stiff, stuck, overwhelmed. Let go of un-truth and accept a little Truth. As you allow this Truth to simmer in to the Mind and Body, you will become lighter, metaphorically speaking that is.

Ok, so Everything is Nothing, super. That should logically mean that Nothing, therefore, is Everything. Sure, sounds good and confusing. Still, it is True. Because Everything we can see, hear, smell, taste, and touch has an atomic foundation, we now know that it all is mostly Nothing, empty.

But that seems so, I don't know, nihilistic? :)

So, knowing this, we can embrace the fact that the only reliable constant is CHANGE. After all, Everything is in a state of constant flux and dynamic fluidity. Why continue believing that things are "just they way they are" when they could be, at least at the theoretical level, ANYTHING, ANYWHERE.

It all comes down to perspective.

Let go, if only as an experiment, of limited Newtonian physics and zoom in/out. Try to view LIFE as constantly changing pure potential of unlimited creativity. You are a part of that! Create, change, and constantly seek to remember it is the space between things that is more powerful and potent. 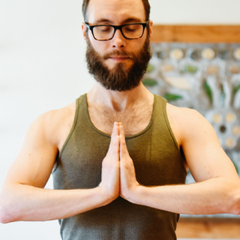 The Philosopher's Stone

Everything is Nothing and Nothing is Everything, which Sure is Something
Did you know…? Everything in the manifest physical experience we call Creation is mostly Nothing. Its True! Atoms, the fundamental “stuff” of our physical reality are 99.99% empty space. Even though we feel mostly solid and experience mostly solids, that’s only one side of the story.
Ross C
ॐ
YES!

Clearing the AIRE on Alignment
Yoga posture alignment…it's a thing. Whether practicing or teaching, alignment is a key focal point for all yoga postures. Is there such a thing as perfect alignment? Well, here are four key points of focus to consider to reach Your perfect alignment.
Ross C
ॐ
The Philosopher's Stone

WYSIWYG - What You See is What You Get
WYSIWYG (pron. wissywig) Truth… What exactly is that? Is it absolute, relative, subjective, or objective? Here’s an answer…YES!
Ross C
ॐ
Q&Q

What's Your Favorite Color?
The infamous ice-breaker. So, what is it? What’s your favorite color?
Ross C
ॐ
Be My YogaFriend
Join the community
Be a Supporter
Support
paypal.me/rosscyoga
ROSSC.YOGA
AboutsERVICEyoga friendsbendjoin today
it's free

A Project of
MonkeyMind Multimedia